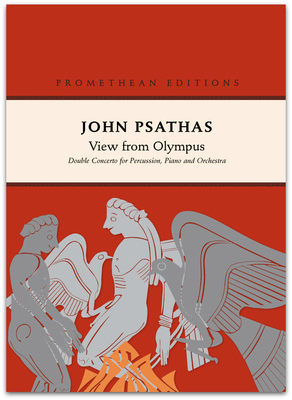 I The Furies - The Furies were avenging spirits of retributive justice whose task was to punish crimes outside the reach of human justice. Their names were Alecto, Megæra and Tisiphone. This movement contains an adapted transcription of a fragment of improvised playing by one of my favourite Greek violinists, Stathis Koukoularis (It appears as a solo for violin about 2 minutes into the movement).

II To Yelasto Paithi (The Smiling Child) - This is the closest I've come to expressing - in a way not possible with the spoken or written word - the feelings inspired by my precious children, Emanuel and Zoe. In this movement is also caught the summer I spent working on the concerto at my parents' house just outside the village of Nea Michaniona - a house perched on a cliff which looks down on the Aegean and up to Mount Olympus.

III Dance of the Mænads - Draped in the skins of fawns, crowned with wreaths of ivy and carrying the thyrsos - a staff wound round with ivy leaves and topped with a pine cone - the Mænads roamed the mountains and woods, seeking to assimilate the potency of the beasts that dwelled there and celebrating their god Dionysos with song, music and dance. The human spirit demands Dionysiac ecstasy; to those who accept it, the experience offers spiritual power. For those who repress the natural force within themselves, or refuse it to others, it is transformed into destruction, both of the innocent and the guilty. When possessed by Dionysos, the Mænads became savage and brutal. They plunged into a frenzied dance, obtaining an intoxicating high and a mystical ecstasy that gave them unknown powers, making them the match of the bravest hero.'

View from Olympus was the recipient of the SOUNZ (Centre for New Zealand Music) Contemporary Award at the 2002 APRA Silver Scroll Awards.